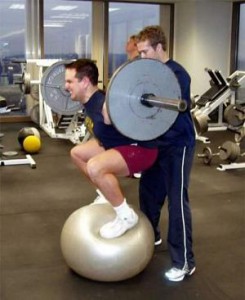 Trends in the fitness industry are a pain in the ass.

This may come off as a rant, but it’s really not.  You see, when new fitness trends come out that are viewed as different and unique, everyone flocks to them like a bunch of cockaroaches.  Look at CrossFit, when a new Box aka ‘CrossFit Gym’ starts up in a town it becomes like one of those light traps for insects.

Another trend that really took off when it broke out into the fitness world was instability or balance training; bosu balls, wobble boards, stability balls, etc.

Everyone including myself jumped on the bandwagon and began doing basic exercises on these new trendy tools and we even gave it a name – “Functional” Training.

The basic idea behind training on an unstable surface was to strengthen the stability muscles and stimulate the core to help maintain balance.  Sounds good right? It did to me. But then all this changed when I began seeing people and trainers take it a bit too far which then became more of a competition of who could do the most ridiculous thing on an unstable surface.

One of the scariest thing I saw was at a gym in New York where I overheard an elder woman tell her friends about her balance problem she’s been having and that her personal trainer suggested she do squats on a bosu ball.  She continued that it’s amazing and so challenging because she even has a hard time getting onto the bosu ball.

All I could do was think, “Great, now I’m going to be freaking out every time I see her trying to stand on a bosu ball without any help.”

And yes…she did end up falling off the bosu ball one day.  Good thing there were other people who were thinking the same as me and were close enough to save another hip replacement.

All this “functional” talk is thrown around like candy at a parade and quite frankly I’m tired of it.  I don’t know what I was thinking when I thought balancing on a ball doing bicep curls to shoulder press was functional.  When will I ever do that? Yes, it’s difficult and challenging.  But so is trying to lick your elbow.

Note: I’m not saying that balance training is a waste of time and should be exiled to a far away island.  I believe there are times for it.  It’s a tool that I may use every now and then.

As I became more aware and stopped jumping on fitness trends, I looked towards people who I think who do ‘Real Life Functional Training’; farmers, construction workers, firefighters, carpenters, etc.  You know real people whose lifestyle is based off of physical movement.

I was at a conference where Rulon Gardner, olympic Greco-Roman wrestling gold medalist who defeated the legendary undefeated Aleksandr Karelin, told of his training background that helped him build his strength which was throwing hay bales at the farm he grew up at.

Then there was another day when my mentor, Josh, and I were training at the University of Redlands and figuring our the correct way to flip a close to 500lb tire.  Check out these old school pics of me  from 2007 flipping that tire. 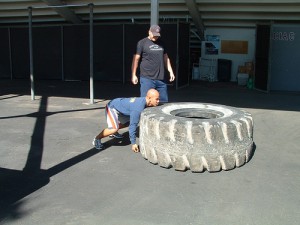 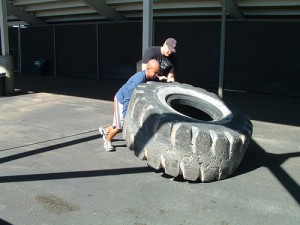 Good times in The Bone Yard at University of Redlands

Anyways, as we were standing around scratching our heads trying to figure out the best way to flip the tire and coach the right technique, the Athletics Grounds Crew, who takes care of all the fields, drove by in their carts.  Kelly, the genius behind the unreal fields at the university asked, “What the hell are you guys doing now?”

Of course we explained it to him, there was a few words exchanged, and then finally a bet was thrown out there.  Josh challenged Kelly to flip the tire, and if he did – Josh would let Kelly roll that big ass tire down the hill with him inside.  I didn’t want any part in this bet because usually they always end bad.

Allow me to give a small bit of information about Kelly just to make my point clearer.  He doesn’t lift weights very often because his job itself is labor intensive already.

Kelly walks up to this tire, lowers himself down, wedges his hands under the treads, and ends up flipping over the damn tire.

By the way, Josh still hasn’t owned up to his bet. One day.

Now you may be wondering since I’m talking about real life functional training, when would anyone else flip tires or throw hay bales on their average day.  That’s true, not many would be but if I had to choose between someone doing a squat on a bosu ball or exercise ball and flipping a tire.  I’d choose flipping the tire any damn day.

There are many tools you can use to create a more Real Life Functional Training; Ultimate Sandbag , kegs, boulders, tires, slosh pipes, and a suspension trainer like the .  Instead of standing on an unstable surface, train with an unstable load that shifts during the exercise.